The Story Behind SRE Colors and Mascot 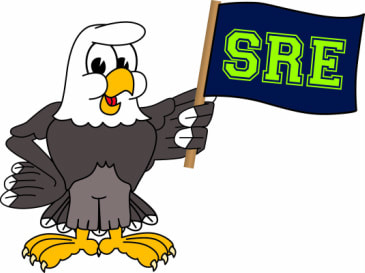 SRE Mascot - The Eagle
SRE has long been identified as the SRE eagles. There were only a few long-term employees and staff who knew that however! As far as we could find, with some digging, there were never any school colors associated with SRE.

​So...in the spring of 2012, the PTO initiated a committee to establish the mascot and colors for SRE. All staff, families, and students were given the opportunity to submit suggestions for color choices and combinations as well as mascot possibilities.

​The results were hilarious! There were so many it took us weeks to sort through and categorize them. We had suggestions on everything from starfish and sharks, to trees, acorns, rivers, and of course - lions, tigers and bears :)

The next step in the process was to vote on the top suggestions.  The "top" suggestions were determined by volume of suggestions and narrowed down by a committee consisting of the PTO, teachers and staff. The final ballot looked like this:
All were allowed to make suggestions in Part One of this process, but only teachers, staff and students were permitted to vote. Voting was done during school hours and the results brought us to the Eagle (although he may look a little different than he did many years ago), and navy/lime green winning by a landslide!